Her latest release, “Tilly’s Top-Secret Trapdoor,” is a 2016 NATIONAL INDIE EXCELLENCE AWARDS FINALIST in the Pre-Teen Fiction category. It tells the story of ten-year old Tilly, who has trouble making friends. Tilly loves to daydream, and in most of her dreams, she’s the most popular girl in school. It’s not a dream though, when one night, she finds a magic trapdoor hidden under her bed. She decides to check it out and soon finds herself in a secret world where she begins an adventure of magic and fun, unaware of the danger she is about to face.

Maureen’s book, “Life in the Gumball Machine” is a story about ten-year old Daisy, and her two friends, Michael, and Patrick. The three kids never imagined that a dusty old gumball machine could make them shrink small enough to be sucked inside. Once they are up inside the gumball machine, the tiny children meet two talking gumballs, and their adventure inside the magic gumball machine begins!

The sequel, “Life in the Gumball Machine-Vinnie and Gordy’s Return,” reunites Daisy, Michael, and Patrick in their quest to help their little gumball pals, Vinnie and Gordy, return safely to their home inside the gumball machine. The kids and Vinnie and Gordy quickly learn that the real world is a dangerous place for two tiny gumball people, and keeping them safe would not be as easy as they’d thought. 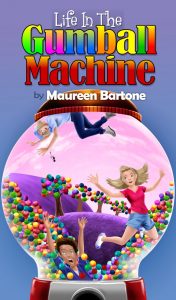 Ten-year-old Daisy and her two pals, Michael and Patrick, stumble across an abandoned old shed on their way to the park. Inside, they find a life-sized dusty old gumball machine with thousands of colorful gumballs inside the clear globe at the top. When one of the kids inserts a coin, the gigantic machine begins to rumble and shake and their strange journey begins. They are unable to fight the strong force that sucks them up the swirling tunnel and inside the gumball machine. Once inside, they find themselves in a strange but colorful, magical world. Unable to escape, the kids explore this odd place and meet some interesting gumball people who show them their world and introduce them to their friends. After a while, the kids begin to worry and wonder whether they’ll find their way home or whether they’ll have to stay in that gumball machine forever. 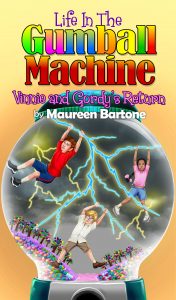 Life in the Gumball Machine  – Vinnie and Gordy’s Return

The magic gumball machine is back! “Life in the Gumball Machine – Vinnie and Gordy’s Return” is the second chapter book from this two-book series for middle school readers. The action and adventure resume as three friends, Daisy, Michael, and Patrick team up with others in a race to return their two tiny gumball friends, Vinnie and Gordy, to their magic gumball world. It’s not easy keeping two little gumball people safe in the dangerous world of humans, and the children run into many problems as they try to get them back home. Their journey takes a dark and dangerous turn as they are once again sucked back up and into that crazy, magic gumball machine. They can only hope to safely return Vinnie and Gordy and still escape with their lives. 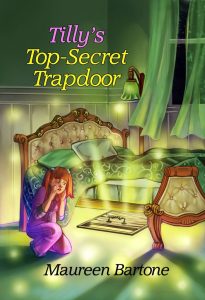 Most days, ten-year-old Tilly is crabby. Friendless and convinced the world is against her, she takes every chance she can to hide under her bed (her favorite place in the whole world) where she can make up stories and pretend she is popular.

One night, after finishing her dreaded homework and her dreaded chores, she crawls under her bed, ready to relax and create another story, when she feels something underneath her. She squirms around to see what it is and finds an old trapdoor, right there under her bed! It had never been there before, but there it was, quietly humming. Slowly, she slides it open and light pours into her room. Peering down, she sees a mystical place that seems to whisper to her.

Both afraid and excited, she crawls down, leaving her bedroom, her home, and her family, ready to begin a journey in a strange and colorful world filled with sweets, magic, and fun! As she wanders through the forest, she meets new friends, and together, they explore this mysterious, wonderful world, where they want to stay forever. Yet, when the cold darkness of night creeps in, things start to change and they quickly learn that this world is not as awesome as they had first thought.

Wet, cold, and afraid, they decide it’s time to go home. To do that, they must face dangers and obstacles unlike any they have experienced. Friendship, courage, and willpower are tested, as these friends fight to get back to the place they once thought was so awful—home.